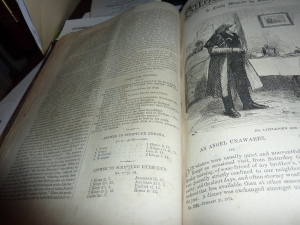 With apologies for the delay in posting these quizzes, here is Scripture Enigma, No. 4, from the February 14, 1874 (issue 1033) of The Sunday at Home: A Family Magazine for Sabbath Reading.

Post any answers you can figure out, or even wild guesses, in the comments thread. Answers will be posted next Friday. Have a nice weekend, and an edifying Lord’s Day.

An element sometimes used as a symbol of the Holy Spirit.

The place to which he belonged who, together with Nicodemus, buried Jesus.

A disciple whom Peter raised from the dead.

The father of Achan.

A river by the banks of which Daniel saw a vision.

A prophetess who endeavoured to intimidate Nehemiah when engaged in rebuilding the wall of Jerusalem.

One who stirred up a revolt against Paul at Ephesus.

One who, for his godly zeal, had conferred pon him and his posterity an everlasting priesthood.

A king of Syria who drove the Jews from Elath.

A place of which it was proverbially said in old time, “They shall surely ask counsel, and so end the matter.”

That which it is good for a man to bear in his youth.

The initials of the above words form a solemn admonition given by our Saviour.

Posted in: Scripture Enigmas, The Sunday at Home

The birthday bash: homemade chicken fried steak with a “Ding Dong” birthday cake for dessert!
My grandfather, Jim “Pa Pa” Boatwright, with his son, my uncle, Allen Boatwright. To the left is Pa Pa in his Century 21 agent days in the early 70s. Both wonderful role models for yours truly! ❤️ Miss them both something awful!
This just in…Jolie-Kate!