Jack Chick Earns the Respect of the Underground Comics Industry 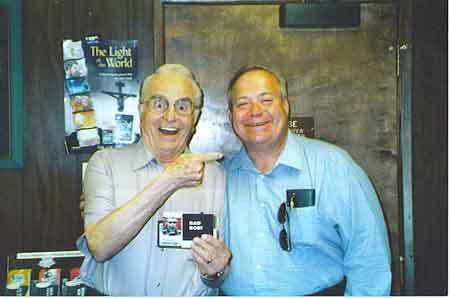 Rare photo of the reclusive and elusive Jack Chick

I should probably save this for another time when I’ve got more time to write all that I have to say about Jack Chick and his world famous “Chick tracts,” (see his site, Chick Publications) but I can’t wait to at least show you the trailer for a documentary about Jack Chick and his comic books and comic book-style tracts. As it relates to me, Jack Chick is one of the instrumental causes of my dropping out of Bible College. I didn’t do my homework because I was too busy devouring his comics purchased from a nearby Christian bookstore.

Anyway, the following trailer features mostly the ways Chick’s views are poked fun of in the film, but if you ever get a chance to watch the documentary itself, as I did on the Documentary Channel a few days ago, you would see how much the filmmakers and even some of the non-Christian interviewees have for his comics as works of art. They say his work is even featured in galleries across the country and I think they said it even has a presence at comic book conventions and other such forums in which such material is auctioned. Jack Chick is collectible. All you fundies out there better hold onto at least a few copies of his tracts in case you need to cash them in once the economy completely collapses!

The picture to the right was found on the site of Catholic lay apologist Jimmy Akin’s website. He found it on the church website of an Independent Fundamental Baptist church whose pastor (right) has a testimony similar to that of the “Bad Bob” featured in the Chick tract of the same name held by the author (aka, Jack Chick himself, left). If you want to read about this picture and the hand-drawn portrait of Jack Chick at the Catholic apologist’s website, click here, here, and here. They make for fascinating reading, and serve as a little background info to some things I may share in a future post when I’ve got more time.

Below is the trailer to God’s Cartoonist: The Comic Crusade of Jack T. Chick.

Oh yeah, there are a few bios you will want to read on Jack Chick and his associates at Wikipedia in conjunction with this video:

Took Kathy, Granny and Abigail (reformedabby) to a baby shower for her Kathy’s cousin Robbie’s daughter, Meghan (@meghan.y_ ), in Paradise, and now #GeorgeLucas and I have taken up residence in a booth in a good, old fashioned #DairyQueen in Bridgeport.
After a strenuous walk with the fluffy, white fur ball of chaos, Gracie is plum tuckered!
Someone in the kitchen loves me!