It’s been a busy October for our little church in the Mid-Cities area of the Dallas/Fort Worth, Texas Metroplex. A few months prior, I spoke with a fellow church member in theory about showing the kids of our church the old 1953 film, Martin Luther, starring Niall MacGinnis. Then, a couple of weeks out, the friend with whom I’d previously spoken asked if we were going to do it. Naturally, I was inclined to do so, but I recalled that in addition to this black and white classic, I also have the brand new Torchlighters cartoon, The Martin Luther Story, produced by the partnership of the Christian History Institute and Voice of the Martyrs. I suggested this video would likely be a little more enjoyable than the older film, and my friend, my wife and our pastor’s wife got to work planning a Reformation party for the weekend prior to our annual Reformation Conference, the DFW Reformation Conference. 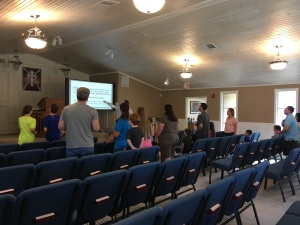 The ladies put together a plan to host a VBS-style party, opening with my own original children’s song about the Five Solas of the Reformation, set to the tune of “Father Abraham.”

Martin Luther nailed, his Ninety-Five!
Ninety-Five Theses, did Luther nail!
I am justified, through FAITH ALONE!
So let’s reform the church!

I’m a sinner and, a saint am I!
A saint and a sinner, at the same time!
I am justified, by GRACE ALONE!
So let’s reform the church!

A believer-priest, that’s what I am!
I can boldly go before the throne!
My only Great High Priest, is CHRIST ALONE!
So let’s reform the church!

I’m unable to, keep God’s commands!
What he wants, he gives me in his Son!
GLORY goes to God, and GOD ALONE!
So let’s reform the church!

Martin Luther nailed, his Ninety-Five!
Ninety-Five Theses, did Luther nail!
I am justified, through FAITH ALONE!
“The just shall live by faith!”

After the kids got the “wiggle worms” worked out of them, we sat them down and fired up the video projector (and yes, we laid down the $80 for a CVLI license to show my DVD publicly). Then the kids moved on to the stations! One station featured a simple game of shooting a nerf gun to knock down five cups representing the Five Solas, another game was a version of pin the nail on the Theses, for my station, my wife decided that I should teach the kids about the Gutenberg press, and how the printing press was so instrumental in popularizing Luther’s reforms. We tried to locate a good model of the Gutenberg press, but on such short notice, the complex wooden and metal model would arrive with only 24 to prepare it. Of course, I bought it anyway, I just wasn’t able to demonstrate it for the kids. I’ll probably build it during my Christmas break .

My wife did, however, locate a much simpler model of DaVinci’s modification of the Gutenberg press, and she also found a small, die-cast metal pencil sharpener in the form of the Gutenberg press. These I combined with my Playmobil Martin Luther figure to at least give them a nice arrangement for the children’s young eyes. I also laid out a few books with pictures of sixteenth-century print shops and summarized the process the original generations of printers went through to produce books and pamphlets. In a thrilling turn of providence, when shopping one day at Barnes & Noble, I encountered the Penguin publication, Brand Luther, by St. Andrews University scholar Andrew Pettegree. The first few chapters of this gave me a good grasp of the subject which I was able to boil down to a few salient points without going over the kids’ heads more than the subject matter otherwise would make it so easy to do. 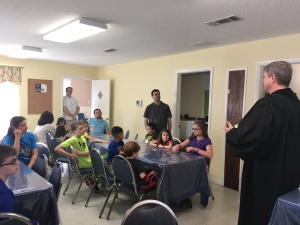 Finally, our pastor’s wife “voluntold” her husband to lead the final station, during which he donned a Geneva gown and spoke on the subject of the Diet of Worms, while the kids ate the ever-popular Diet of Worms cake—a dirt cake with gummy worms added. This they washed down with root beer, because, you know what a big advocate of the barley brew Dr. Luther was. Pastor Troutman summarized this council, read his famous “Here I Stand” speech, and also the Emperor Charles’ idle threat, the Edict of Worms,

which called Luther “a notorious heretic.” According to some podcast which slips my mind at the moment, Charles hoped this edict alone would discourage Luther’s followers and end the spread of Luther’s teachings.