A Question for Presuppositionalists 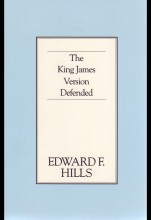 For those who may not be familiar with what “presuppositionalism” is, it can be described simply as the Reformed approach to apologetics (defense of the Christian faith). The New Dictionary of Theology explains: “The presuppositionalist endeavors to convince the unregenerate first by demonstrating that, on unregenerate presuppositions of chance occurrence in an impersonal universe, one cannot account for any sort of order and rationality. Next, he tries to show that life and reality make sense only on the basis of Christian presuppositions.” (see this link for citation)

I have not studied presuppositional apologetics personally to any extent whatsoever, yet. However, based on short definitions like the ones above, it occurred to me once upon a time, that since Edward F. Hills, author of The King James Version Defended is a graduate, not only of Yale, but also of Westminster Theological Seminary, and that much of Hills’ defense of the Textus Receptus (the popular name of the Greek text that underlies the King James Version New Testament) is written from a characteristically Reformed standpoint, that when he further makes his defense from what he calls “The Logic of Faith,” that this must be his way of applying presuppositional apologetics to the defense of the superiority of the Greek Text underlying the King James Version, as well as that translation itself.

My question for presuppositionalists who’ve read The King James Version Defended, therefore, is: Am I right? Was Hills a presuppositionalist, and is his so-called “Logic of Faith” a fair representation of the presuppositionalist apologetic, and is belief in the inherent superiority of the Textus Receptus therefore the consistently Reformed answer to the question, “Which New Testament text is closest to the original manuscripts?”

My personal short answer is, “I hope not.” I don’t really think the conclusion necessarily follows from the premise. I’m sure most presuppositionalists agree with me on this, and could probably give a better explanation as to why, and I’d like to see what you’d have to say on this topic. I’d also be interested in any King James Onlyist presuppositionalists out there (or perhaps more accurately, Textus Receptus Onlyist) who would answer yes to the question as stated in the previous paragraph.

Independent Baptist defender of the King James Version, Dr. David Cloud, has posted “The Testimony of Dr. Edward F. Hills,” in which Hills explains his journey to the position he defends. He writes that he was puzzled by Dr. B.B. Warfield, who was simultaneously perhaps the premier champion of the Westminster Confession of Faith, and an avid proponent of what Hills considered the textual criticism of theological liberalism. Hills explains that Warfield must have fallen prey to the false dichotomy between faith and reason, which he says Cornelius van Til taught him was begun by the medieval scholastic theologians. In this testimony, Hills does not state explicitly that he applied van Til’s presuppositional apologetic to this question, but what he does state explicitly does seem to say, at least implicitly, in my opinion, that this is just what he did.